The technology provider’s latest UK Cities House Price Index recorded a 0.9% increase in values in the capital to £480,500.

The rate of growth compares with an average of 3% in the same period last year.

Hometrack cited fears of a potential housing bubble, tightening credit terms and concerns over a mansion tax as reasons for the slowdown.

Overall, house price inflation across the 20 UK Cities in the index is holding steady at 8.5% per year, higher than the 5.7% growth recorded twelve months ago at £239,100.

The largest price growth in the index was in Cambridge where values are up 3% to £422,200 while Aberdeen recorded the biggest drop, falling 3% to £181,300 in the quarter.

Responding to the data, Adrian Gill, executive director of agents Your Move and Reeds Rains, said: “London house price growth slowing to its lowest level in two years should not be seen as a negative reflection of the wider market.

“On the contrary, it is a positive indication that supply is gradually increasing, helping to ease the upward pressure on house prices. In fact, our stock of property for sale in London at the end of September was 20% higher than at the same period last year.

“Demand for property across the rest of the UK also remains strong, highlighted by the steady annual rise of house price growth in cities such as Liverpool and Manchester.

“Despite this, there remains a gross imbalance between supply and demand. London house prices are still up 10% annually and until more homes are built to meet soaring levels of demand, prices will only continue their upward climb.”

See how your region ranks below. 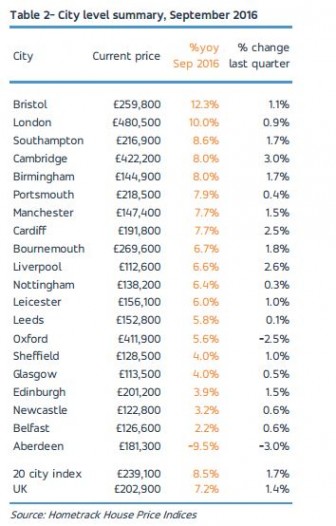