As riders of Agents Giving’s Great British Property Cycle start their challenges closer to home, chairman Peter Knight is mounting his bike in the USA with some distinguished rugby folk. Here’s his first despatch:

It’s to raise funds for Velindre, a charity with the purpose of “victory over cancer”.

I got involved with this remarkable charity in 2010 when, with many members from this ride, I climbed Mount Kilimanjaro.

I didn’t know that much about the work of Velindre at that time, just that it researches the causes of cancer as well as treats people using many new and pioneering techniques.

Since becoming an ambassador for the charity I’ve learned from the medical teams there just how much effort they’re making to combat this disease that will affect one in three of us.

This year for me the ride is even more poignant than in 2012, when we cycled from Yosemite to San Francisco, as one of my best friends, who climbed Kilimanjaro with me, is currently fighting virulent bladder cancer.

Having been with him on many occasions where we’ve raised money for this cause his absence from the ride has really brought it home to me just how likely everyone is to have their lives impacted by this terrible disease.

Today’s ride was the easiest of the five days, just 75K from Boston to Plymouth with no really steep hills and a good way of getting the team underway.

Plymouth is known as “America’s hometown” as the Pilgrims arrived here on board the Mayflower in 1620 and I’m looking forward to seeing some of the historical landmarks this evening.

As I rode through this charming part of Massachusetts I was struck by how many people whooped and cheered us on our way and who were surprised when we told them our destination was far away New York.

This is still a country where the default mindset of most people is positive and upbeat, and helps make those 75 kilometres all the more worthwhile.

* Peter Knight is chairman of Agent’s Giving, the estate agents charity that aims to raise money for many good causes. Peter is pictured second left with (left to right) Martyn Williams, Mike Hall and Jonathan Davies 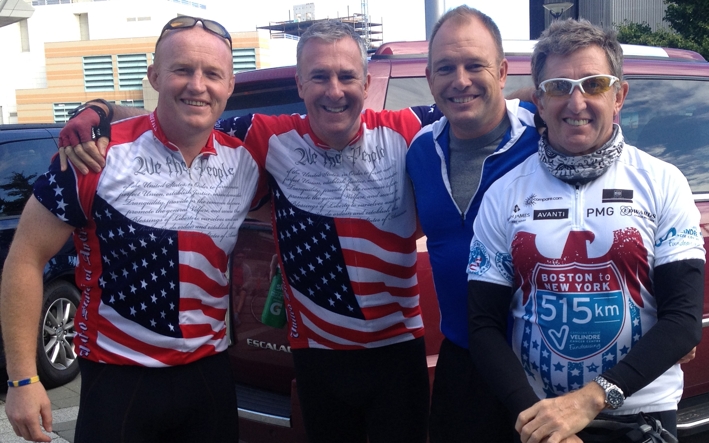