Spotted on social media – and it reminded us of Johnny No Mates or the Millwall fans’ chant, No One Likes Us.

Kenneth Bruce, half of the successful brother duo behind the global phenomenon Purplebricks, is clearly a bit upset that he’s not more popular.

Writing on LinkedIn on Friday, the day that Purplebricks launched into America, Kenny said: “I know the industry don’t care much for Michael and myself or the great work Purplebricks has done in the UK.”

However, he goes on to praise his team and to thank them and their families. 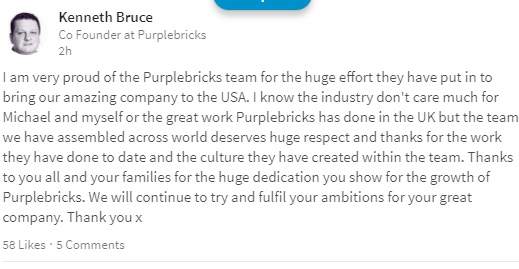 Earlier on social media, Bruce had voiced his thoughts on LinkedIn about a Telegraph story alleging malpractice by an un-named high street agent said to be prioritising applicants who use its mortgage services – and apparently paying them £1,000 to do that.

Bruce wrote: “When I read this I thought what a crying shame for our industry that this sort of practice goes on . . . introducing a new practice or product is ‘how does this affect our customers and people?’ When the answer is it does not benefit both, then bin it.

“Clearly this practice was introduced to benefit the company and no one else. What a shame for our industry and profession.”

The City looked as though it did not know what to make of Purplebricks’ American adventure. Its shares started at 389p on Friday morning, went up to 412p, but finished the day where they began. The shares were however tipped in yesterday’s Mail on Sunday Midas column.