The event, hosted by evictions firm Landlord Action, was a sell-out and raised over £18,000 for children’s charity the Rainbow Trust.

Whilst guests enjoyed a three-course dinner, 12 boxers from Savills, Winkworth, Life Residential, Rushfield, Panther Securities, Infiniti Properties and Fraser and Co, plus Landlord Action’s Paul Shamplina, took to the ring. Apparently the fast and furious action had some guests on their seats, others out of them, and a number standing on them.

The sporting event, which took place at The Holiday Inn in Finchley Central, north London, was filmed by Channel 5 as part of a wider documentary it will show next month following the work of Landlord Action.

The night concluded with a speech from Shamplina, who thanked all those involved in the evening, with special mention to his wife Rita, who he said was instrumental in helping to organise the event, and to Peacock Gym in East London which partnered the event to provide a boxing training programme for the participants.

Shamplina – fourth from the right in the picture and who could be said to punch above his weight – said: “For a while now, we at Landlord Action have wanted to run an event to support a children’s charity, and we chose Rainbow Trust for all the incredible work they do in providing emotional and practical support to families who have a child with a life-threatening or terminal illness.

“Being an avid boxing fan, there was no better way to raise money for a very worthy cause than to bring together some of my property industry peers for a rumble in the ring. Bring on next year.” 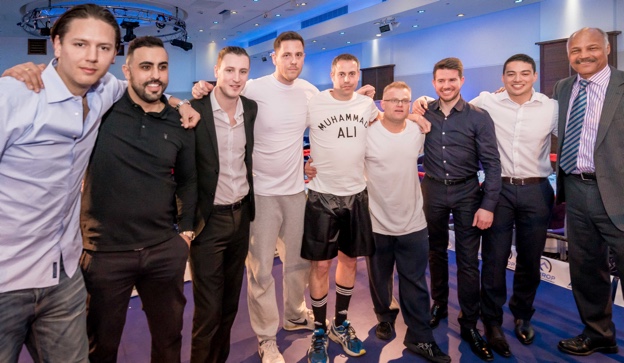