The recent Budget stimulated an +80% spike in buyer demand for property compared to the four year average, according to the latest findings by Zoopla in its monthly House Price Index.

However the supply of new homes for sale is still constrained, down 13% this year compared to the 2020 average. Nevertheless, the volume of homes for sale is expected to recover as the Covid vaccination programme continues to gather pace and the Prime Minister’s roadmap out of lockdown comes into effect.

Time to sell falls by a week

Sales agreed are up 5.3% compared to the same period in 2020, powered by the sheer demand in the market, which in turn is expediting the speed at which sales are being agreed.

The average time to sell a property in the UK has fallen by nearly a week across the UK excluding London, down from 50 days in 2020 to 44 days now. In contrast, London is the only region in the UK where properties are taking slightly longer to sell, which is a reflection on the strength with which the market bounced back in early 2020 in the aftermath of the General Election, but also signals the impact of Covid-19 on London’s residential market, particularly in central areas.

The North East and the North West have recorded the highest reduction in time to sell on a regional level, falling by 17 days and 12 days respectively. At the same time, the North West and Yorkshire and the Humber are the fastest moving markets in the UK, with sales agreed on properties in an average of just 38 days from the point of listing. 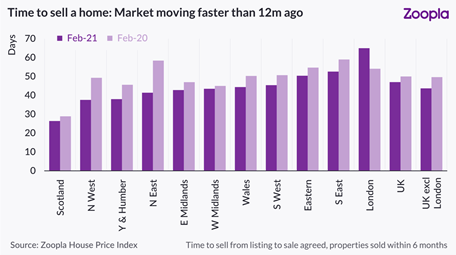 Polarised property
The pandemic is continuing to polarise demand for property, with houses now selling three weeks faster than flats. The lockdown-led ‘search for space’ means houses are taking an average of 42 days to go from the point of listing to sale agreed; this compares to 62 days for a flat.

Demand for three-bed homes jumped by 30% in the week after the Budget; these family homes are still the most coveted type of property across the UK. Such demand is also pushing up price growth for houses, with the average value of a house rising 4.9% on the year, compared to 1.9% growth for flats, reflecting the ongoing divergence in demand.

While demand for flats is down across most of the country, the Budget instigated an uplift for one and two-bed flats in London and the South East. This indicates increased buying intent amongst first-time buyers, whose capacity to buy will be boosted by the 95% mortgage guarantee once it comes into play in April. It also goes some way to reverse the fall in first-time buyer share of sales in 2020, in the wake of reduced high loan-to-value mortgage lending. 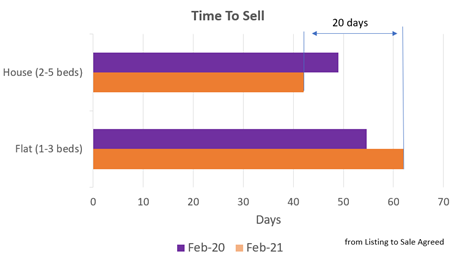 130,000 properties for sale in England will be stamp duty free for another six months

Housing markets across the north of England are in pole position to benefit from the stamp duty extension to the end of June and subsequent tapering off to the £250,000 threshold, at which point they will be eligible for a saving of up to £2,500 per transaction.

More than two thirds of properties currently for sale in the North East, North West, and Yorkshire & the Humber fall under the £250,000 stamp duty threshold, meaning that buyers in these regions have more opportunity than anywhere else in the country to buy tax-free before the end of September [see figure 3].

Across England, Zoopla estimates that there are currently around 130,000 homes for sale that will attract no stamp duty until the end of September, amounting to a potential stamp duty saving of £123 million, which will only increase as more properties are listed for sale.

Overall, Zoopla anticipates that more than half a million buyers this year will benefit from some level of stamp duty relief. 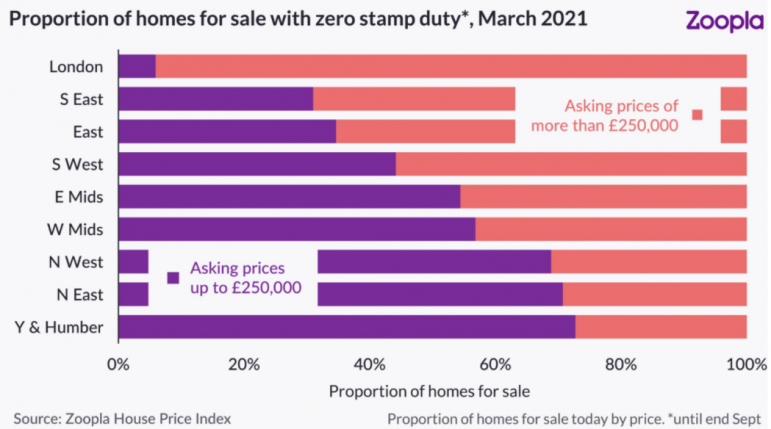 From a national perspective, average home values are up 4.1% since the start of the first lockdown, amounting to £8,907 on the year or £750 per month. While annual house price growth is down slightly from 4.4% last month, this marks the fourth consecutive month of house price growth over 4%.

At a city level, Liverpool and Manchester continue to show the strongest levels of annual house price growth, up 6.6% and 6.4% respectively.

In value terms, average house prices in Manchester and Bristol have increased by almost £1000 a month since the pandemic started a year ago, rising £11,450 and £11,239 respectively. Both cities have outpaced the growth in London, where prices have risen £11,172 over the past 12 months.

“The search for space is driving continued demand for family homes, which means prices for houses are rising faster than flats, and houses are also selling more quickly.

“The prospects for the housing market over the next year have improved on the back of Budget. The continued search for space, the stamp duty extension and mortgage guarantees will support activity levels and headline house price growth up to the end of Q2 2021.

“Yet the pathway out of the lockdown, and the route to a full re-opening of the economy and unwinding of support measures, is unlikely to be simple or smooth.

“We still expect house price growth to moderate later in the year, but overall transactions are set to benefit from an additional boost following the stamp duty extension and tapering.”