Average house prices in regional cities including Birmingham, Edinburgh, and Manchester are expected to rise by 20% to 30%, according to new figures from Hometrack.

In its latest UK Cities House Price Index, Hometrack said that regional cities would start to close the gap to London, which has seen nominal prices leap by 89% since 2009.

While Oxford and Cambridge have also performed strongly, effectively as if they were extensions of the London market, and Bristol has grown 70%, other areas have seen much slower increases.

Prices in Aberdeen have risen just 6% since 2009 and average prices in Newcastle are just 18% higher over the same period.

However, Hometrack said that while regional cities have lagged the London market over the past ten years, they are now starting to see stronger growth.

Average prices in Edinburgh rose 7.7% year on year in January, with a 7.3% increase in Birmingham and 6.7% in Manchester.

By contrast, growth in London has slowed to 1.6% year on year, meaning that prices are falling in real terms.

Hometrack said cities outside southern England have further room for house price growth but that this growth would not match the scale registered in London since 2009 because the underlying market dynamics for London are different, thanks to high levels of overseas and investor buying.

Richard Donnell, insight director at Hometrack, said: “We expect to see average house prices rise by 20% to 30% in cities like Edinburgh, Birmingham and Manchester in the next three to four years.

“The income to buy a home in regional cities is well below the London average so in the near term we expect to see rising house prices stimulating additional buying and market activity in those areas.

“House prices have some way to increase before there is a material constraint on demand.

“This assumes mortgage rates remain low by historic standards and the economy to continues to grow.” 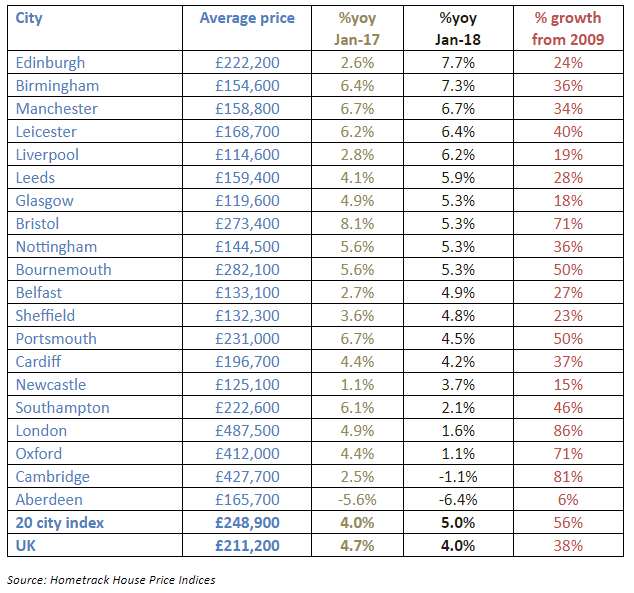