Property buyers in UK cities and major towns are having to pay up to 13 times their salaries to get a home.

London is the most expensive city in terms of the salary to house price ratio, but Cambridge, Oxford, Bournemouth and Bristol are not far behind.

Across 20 UK cities and major towns, buyers are paying a house price that is an average of 6.7 times their earnings.

In all of these cities, with the exception of Aberdeen, house prices have risen.

However Zoopla – which produced the figures – says that affordability is actually improving in 12 cities, including the most expensive four, where earnings growth is outstripping house price inflation.

“There has been a clear downward trend in the ratio of house prices to average earnings over the last two years.

“However, the scale of improvement is relatively modest.

“While welcome news, the gap between earnings and prices needs to close further in order to make a material difference to would-be purchasers.

“The changing picture is not limited to London. There are 12 cities where the annual growth in house prices is below the growth in average earnings which is running at 3.7%.

“Lower-priced cities in northern England are actually getting less affordable than their southern counterparts when you consider that the annual percentage growth in house prices is outstripping earnings growth.” 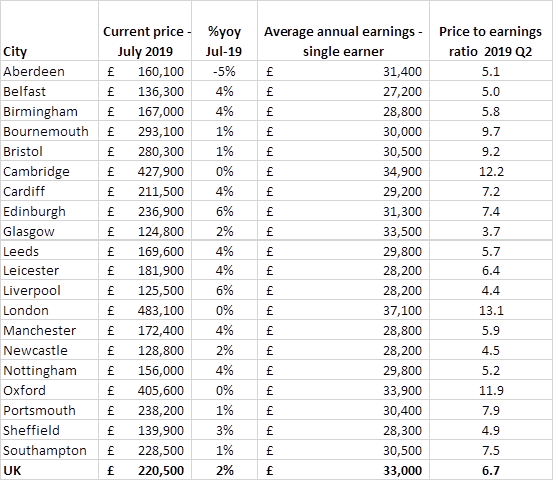