Figures from Hometrack show the overall rate of house price growth in the UK’s top 20 cities increased to 6.1% in October to £254,700 – the highest rate since September 2016.

The analytics firm also assessed how affordable property has become over the past 15 years.

It found that buyers in the capital now face an average price to earnings ratio of 14.5 when trying to buy. This is 42% higher than the average for the past 15 years of 10.2.

Richard Donnell, research and insight director at Hometrack, said: “Unaffordability in London has reached a record high despite a material slowdown in the rate of house price growth over the last year.

“In regional cities outside of the south-east, house price growth remains robust as affordability is still attractive and unemployment continues to fall. This can be seen in cities such as Manchester and Birmingham where the current house price to earnings ratio is only slightly higher than it has been on average over the last 15 years.

“As long as mortgage rates remain relatively low and the economy continues to improve, there is a strong feasibility that house prices will rise steadily in regional cities over the next two to three years.” 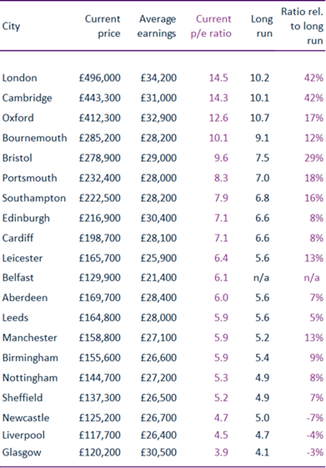