The Government has insisted it is on track to hit its target of delivering 300,000 new homes a year by the mid-2020’s as official figures show house building hit a decade-high last year.

The additions are made up of 195,290 new-build homes, 29,720 gains from change of use between non-domestic and residential, 4,550 from conversions between houses and flats and 680 other gains. This total was offset by 8,050 demolitions.

James Brokenshire, Housing Secretary, said: “The figures are great news and show another yearly increase in the number of new homes delivered, but we are determined to do more to keep us on track to deliver the homes communities need.

“That’s why we have set out an ambitious package of measures to deliver 300,000 homes a year by the mid-2020’s. This includes over £44bn investment, rewriting the planning rules and scrapping the borrowing cap so councils can deliver a new generation of council housing.”

Blane Perrotton, managing director of national property consultancy Naismiths, said: “Ever since the Brexit referendum sent an icy chill down the spine of UK construction, Britain’s house builders have prided themselves on keeping the home fires burning.

“As other sectors slowed, the housing crisis kept house builders consistently busy. The confirmation that more homes were completed in 2017-18 than at any point in the preceding decade is rightly a badge of honour for a sector that has raised its game in response to huge demand.

“You don’t need to follow every tortuous twist and resignation of the Brexit saga to identify the culprit for the slowdown.

“Fragile demand and a lack of developer confidence since the 2016 vote have both slammed on the brakes, even here in the engine room of the construction industry.”

“The number of Energy Performance Certificates granted to new homes suggest a continued pick-up in activity this year, but separate data which captures information on new homes being started on site, shows a moderation in activity, which could weigh on housing completions in 2020/21.

“There is also a headache for policymakers in London, with net additions in the capital falling by 20% over the year.”

“As well as providing desperately needed new homes, the increases are providing an economic boost across the country. House building sites have created hundreds of thousands of new jobs and provided billions of pounds towards improving local infrastructure and communities.

“Whilst huge progress is being made, Government needs to continue to work with all parts of the housing sector to assist them to deliver further increases if we are to hit their 300,000 target.” 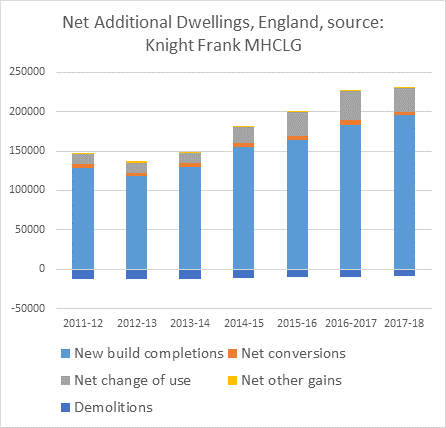