There has been a significant increase in the number of people from Hong Kong buying property in the UK, estate agents report. 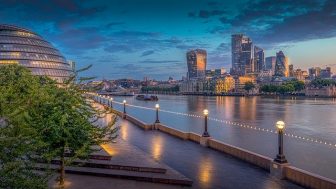 Research shows that Hong Kongers became the fifth largest foreign investors in central London as of last August and have been driving up prices in some popular districts outside the capital.

Some people are investing in the UK’s buy-to-let market, while others are making preparations to move to the UK to live.

A visa scheme to allow Hong Kong residents to come to the UK opened almost four weeks ago, with some 300,000 people expected to apply.

The visa, which is open to holders of a British National (Overseas) passport and their immediate dependents, will offer a fast track to UK citizenship.

The UK launched the new visa after China imposed a new security law.

Those who apply and secure the visa will be able to apply for settlement after five years and then British citizenship after a further 12 months.

About 7,000 people from Hong Kong have already been allowed to settle in the UK since July, the Home Office said.

“It’s become much more of a trend in the past six months or so,” Guy Bradshaw, head of London Residential at Sotheby’s International Realty told Reuters. “I’ve certainly been involved in a lot more conversations and Zoom calls with people in Hong Kong and funds in Hong Kong.”

Marc von Grundherr, director at Benham and Reeves, said he has seen the same trend.

“I’ve had a few clients come to us and say, ‘Look, my son or my friend is wanting to invest in property because they’re thinking about coming [to the UK], but they can’t afford to do it on their own or they want to buy something slightly different – is it okay with two or three or four of them buying together?”