Online agents sold 7.6% of homes that went to exchange in the first three months of this year, meaning that high street agents still have over 92% of the market.

Exchanges overall were up by 7.4% compared with the same period last year but down on the last quarter of last year, with the market characterised by an ongoing shortage of new listings.

Data firm TwentyCi said that new property instructions were down 5.3% year on year.

The firm said of the 7.6% online agents’ market share, that while it was up from 7.2% at the end of last year it was “still a long way from the heady 20% market share forecast by several online agents on their inception”.

It added that most of the properties sold by online firms were lower value and in the north of the UK.

A table of online agents’ market share by region shows growth of over 50% in Scotland, and of over 6% in the north-east, but market share drops in southern regions, particularly in London. The most sizeable market share is in the west midlands, at over 10%, and the lowest in the east of England at just over 4%. 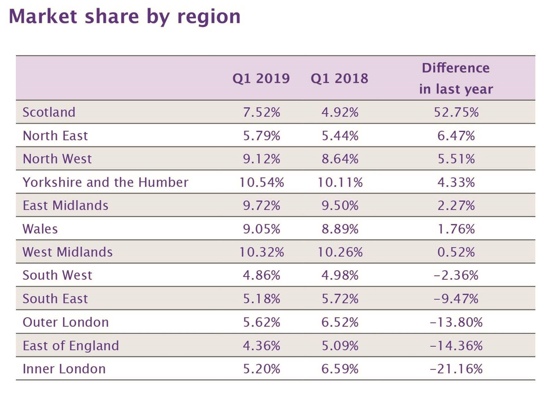 TwentyCi went on: “Unless online agents are able to penetrate the market in the south and engage with higher-value home owners, their growth and market share will continue to be capped.”

Over the year, market share had grown only in the cheapest properties (up from 8%).

In its latest quarterly report out today, TwentyCi also documents the overall housing market. It said that the only regions in the UK where average asking prices continue to grow are the midlands, and Yorkshire & the Humber.

The largest annual falls were 4% in both London and the south-east.

The report also paints a vivid picture of the rental market in major cities, with nearly 70% of all property listings in London being for rental properties.

In other cities, the average proportion of rental listings was 50%.

Below, how the market looked during the year to the end of March 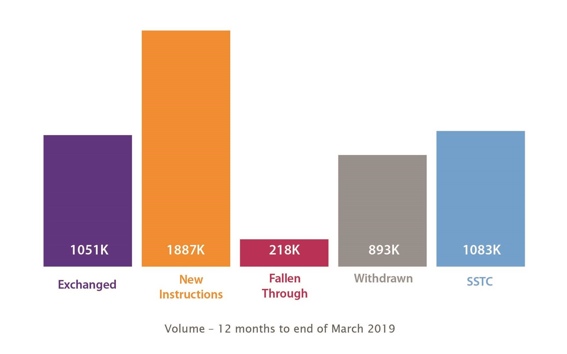