Congratulations to Hamptons International, celebrating its 150th birthday this year.

To mark it, each member of staff is being given their birthday as an extra day’s leave.

Hamptons has also committed to making 2019 its biggest year yet of fund-raising in support of Cancer Research.

To date, the firm has raised almost a quarter of a million for the charity.

Hamptons will also be unveiling a ‘green’ initiative called Project Planet, with details to be announced later this year as to how it will become more environmentally conscious as a business.

Hamptons started off in 1869 with one office in Pall Mall, eight members of staff, and George Hampton as managing director.

Today, it is a Countrywide brand with over 90 office in London and the south, employing over 1,000 people.

Hamptons managing director Lesley Cairns said: “Hamptons is a respected heritage brand with an incredible legacy, and this year, as custodians of the brand, we will do the business proud.”

Countrywide bought Hamptons in 2010 from its Dubai-based owners Emaar Properties.

Congratulations also to Paul Wallace Estate and Letting Agents, with two offices in Hertfordshire, which is marking its 70th birthday this year.

It was founded in Hoddesdon in 1949 by Paul Wallace, who had served as a captain in the North Africa campaign during the war.

The business still has a branch on Hoddesdon High Street plus a second in Cheshunt. It has had other offices over the years – in Welwyn, Hertford, Ware, Epping, Waltham Abbey and Enfield – but now covers these areas from its current offices, where it says it is still seeing “fantastic footfall” thanks to locations which continue to attract large numbers of shoppers.

Employing a staff of 14, the firm says it enthusiastically embraces technology but definitely sees the high street as the way forward.

This rather fuzzy picture shows how Paul Wallace’s Cheshunt office looked in the eighties. We’re intrigued – did the woman really have a wire basket to pick up the particulars, or was she on her way to or from the supermarket? (Unfortunately, we remember the hairstyle.) 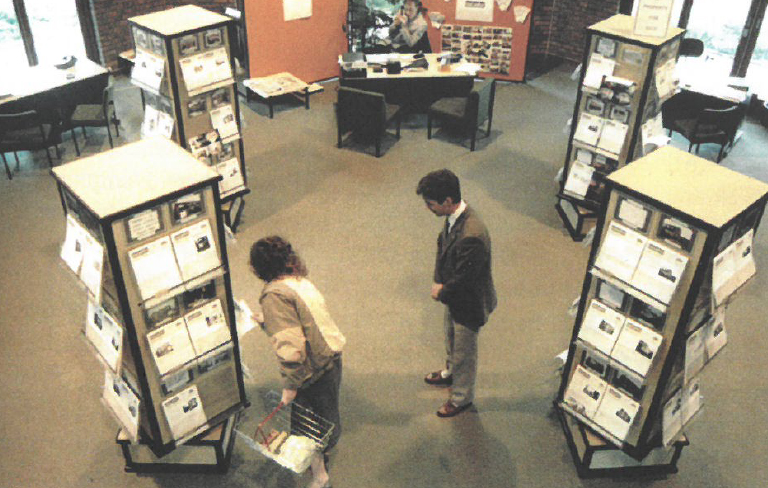