Firms across the UK took part in Agents Giving Day on June 18 by donating items to food banks.

Agents collected thousands of essential food items and toiletries in their offices to make up food parcels and make the all-important delivery to the foodbanks.

Peter Knight, chairman of Agents Giving, said: “We were thrilled with the number of agents collecting and donating food parcels for this Agents Giving Day, literally thousands of food items were collected and donated.

“Thank you to all agents for their generosity – such an incredible job from all those involved.”

It’s not too late if you would like to collect and donate food items.

Find your local foodbank and see what items they require: https://www.trusselltrust.org/get-help/find-a-foodbank/

For full information on how to get involved with this initiative, visit the Agents Giving website agentsgiving.org.

The final numbers are in for #OneThousandItemsofFood The Network has absolutely smashed the initial target of 1000 food items collecting over 6500 items of food that has been donated to local food banks around the Network. A huge congratulations to everyone who took part! pic.twitter.com/DKxEUabHoN 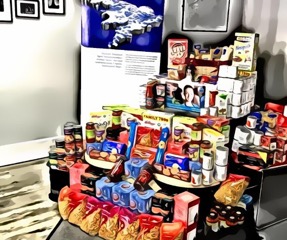