Former Territory Owners have been given days in which to accept an offer to enter a new five-year agreement with Purplebricks as  Local Property Experts.

According to a letter we have seen which was written to one former Territory Owner, they are being offered a sum understood to be around £4,000 to “facilitate” their entry into a new agreement “in exchange” for their agreement to “this variation of terms” and early termination of the existing agreement on February 21.

The offer is on the table until this time next week, February 19.

Those who agree are being told to accept in writing by the 21st when they will be released from the existing agreement and receive “the payment promptly”.

For those who “choose not to accept, we will consider which other options are available to use under the [existing] Agreement”, says the letter

The choices are given in the letter from CEO Vic Darvey, which also suggests that the business has had to consider a changing “legal and regulatory environment”.

Its recent shake-up includes the reduction of 100 Territory Owners to 43, and the stripping out of a tier of management, that of Regional Directors. Purplebricks has said it hopes to deploy most of the Territory Owners who no longer have a territory.

The letter adds that  there has been a review of the UK operating model “to ensure that it remains best in class and sets up both Purplebricks and its network of LPEs for sustainable future growth”.

Darvey’s letter goes on: “In undertaking this review, we have had to consider the developing legal and regulatory environment for Purplebricks and our network of LPEs to ensure that our businesses remain viable as the estate agency sector, and our model, both face greater scrutiny.

“I am pleased to inform you that we have now completed the review and have a plan that will achieve our aims, and that we would like to facilitate your entry into a new 5 year Local Property Expert agreement with a Territory Owner.

“As part of the review we assessed the performance of all our our territory owners (including your business) and notwithstanding the various termination rights we have available under the Agreement we would like to offer the amount . . . to facilitate your entry into a Local Property Expert agreement operating  under a Territory Operator appointed by us in consideration for your agreement to this variation to the terms and early termination of the Agreement on 21st February 2020.”

In the draft contract for LPEs there is a checklist of duties, together with timeframes where applicable and targets.

These include LPEs having to ensure availability seven days a week, including outside normal working hours. They are expected to convert valuations to instructions at a minimum measure of 45% in Scotland, 40% in Ireland, 35% in London, and in the rest of the UK at 40%.

We have been told that a number of Purplebricks ex-Territory Owners are thinking of not accepting the new terms, citing reduced remuneration – of some £24,000 a year, according to a couple. One also expressed concern about the ‘open all hours’ clause on availability that LPEs must agree to.

Last night a Purplebricks spokesperson said: “Our model gives Local Property Experts the freedom to organise their diary in a way that suits them.

“Although they may sometimes help customers outside normal working hours, they can work flexibly, manage their own time and don’t have to be in an office every day.” 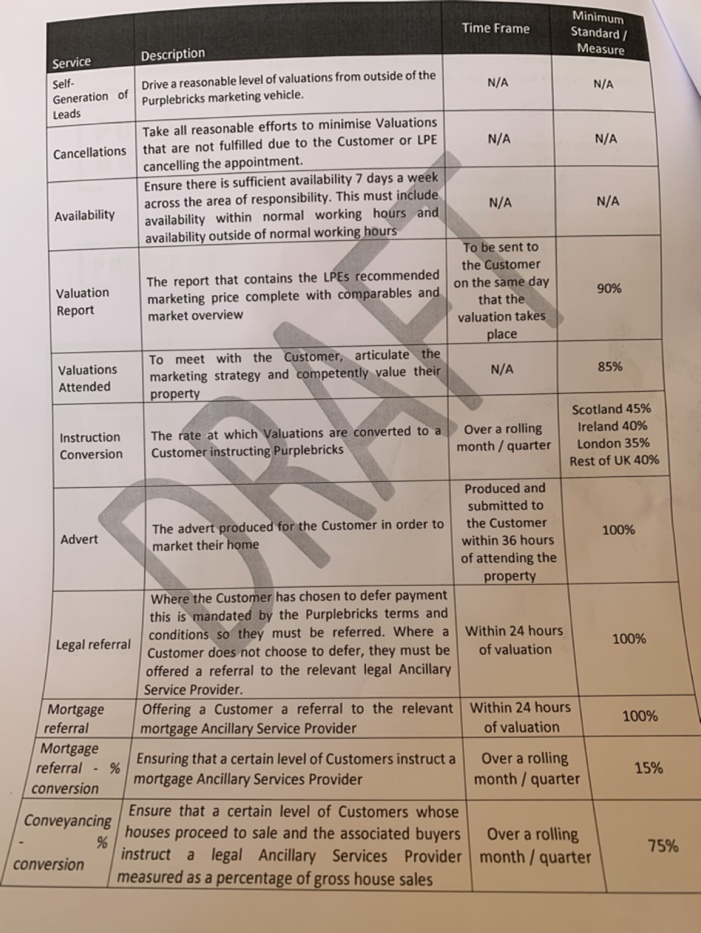