Estate agents believe that a Remain vote will be a far safer option for the housing market than one to Leave.

EYE’s snap poll yesterday, which ran from mid-morning through to 8pm, drew a total of 777 responses from agents.

EYE did not attempt to lead the responses in any way, and our stance on the referendum has always been neutral: we believe all readers are perfectly capable of making up their own minds.

So, without any steer from us, the responses may prove illuminating.

Almost all the responses were from the smallest independents with one to three branches.

Most (68%) said that the uncertainty over the referendum has already damaged their own businesses.

House prices, however, seem to have been barely affected, with only 4% reporting lower prices being offered and accepted.

But what could change after Thursday?

In the event of a Remain vote, only 34% of agents think the market will change, and 64% think it will not.

In the event of a Leave vote, it is almost the other way around: 77% of agents believe the market will be changed, while 23% believe there will be no change.

If there is a Remain vote, 62% of agents believe transactions will rise, against just 8% who think they will go down.

Agents are also inclined to believe that house prices would rise rather than fall after a Remain vote.

However, 30% of agents did not answer this particular question – just 136 out of the responses indicated house prices would rise, and 7% that they would fall.

Agents were much more convinced that house prices would fall in the event of a Leave vote (332 made this prediction, against only 7% who said they would rise).

Just one third of the agents (30%) agreed with the statement that the EU is a costly and bureaucratic machine which stifles entrepreneurship and which the UK should leave.

This was against 48% who agreed that the UK cannot afford to leave the EU and that we should stay.

However, 16% thought that whether the UK stays or leaves will make little difference.

A further 6% were undecided.

Of the agents – to whom we are very grateful – who answered yesterday’s snapshot poll, 62% were small independents with up to three branches, 15% had between four and ten branches, 5% had up to 20 branches and 2% had over 21 branches. A total of 18 replies were received each from those describing themselves as online and hybrid agents. 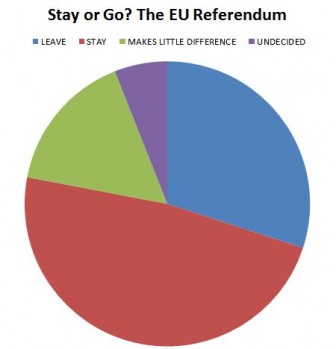