Around 2,500 people representing over 300 organisations marched on Westminster yesterday to demand an end to the housing crisis.

The rally, organised by Homes for Britain, called on the next government, regardless of its political hue or composition, to end the housing crisis within a generation and to draw up plans within its first year setting out how this will be achieved.

The Homes for Britain event began at noon when a hot air balloon resembling a giant house was floated on Parliament Hill at Hampstead Heath.

The poster below is part of the Homes for Britain campaign, and is visible to MPs daily as they use Westminster tube station. 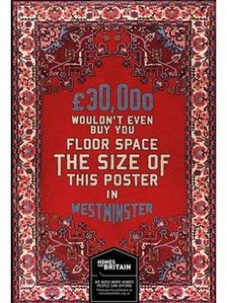