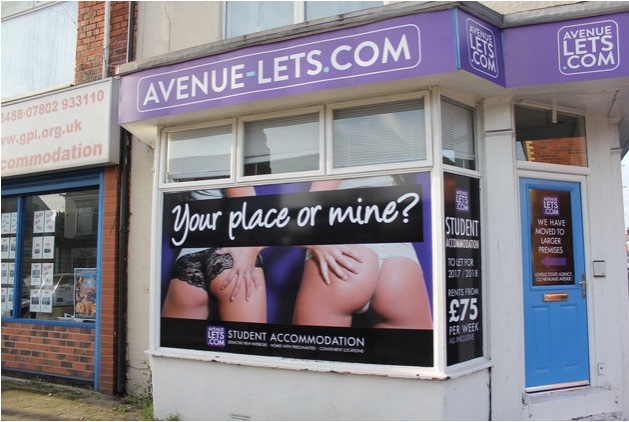 A picture of all-but-bare bottoms in a letting agent’s window has been causing a stir after the image was posted on social media.

Residents in Hull said the full-window display was ‘inappropriate’ and in ‘bad taste’, and ‘objectifying women’, with calls for it to be taken down as schoolchildren walk past the window each day.

One resident said: “I hope to bring my sons up to respect women, but how is that going to happen when there are adverts like this in plain sight?”

Others thought it meant that an adult shop would be opening in the premises of student letting agency Avenue-Lets.

The more legally pressing issue as to to the display of letting agent fees has seemingly not made it on to social media.

The Hull Daily Mail quoted local councillor Mike Ross who said he had received several complaints about the advert.

He said: “I would say businesses need to think carefully about using advertisements to show exactly what it is they are selling.

“It is something that has definitely got the residents talking.”

However, Avenue-Lets said it had been complimented.

A spokesperson told the Hull Daily Mail: “The images used are from the Advertisement Standards Agency, these are not images we have produced ourselves, and we have received more than 20 compliments for using them.

“These images were not used to offend or upset anyone, or objectify men or women, and as a marketing campaign we have reached the targeted market.

“As with any marketing campaign, these images were due to be changed in January, but we will endeavour to look at bringing that date forward.”

It is, however, possible that the campaign has been entirely successful.

As one person posted on Facebook: “The advert may offend but at least the properties are a lot better than some of the student landlords in the area.

“Landlords are in trouble either way: if they promote to students people kick off, if they let to other people residents moan.

“The student market is getting harder to compete in as the uni build more accom on site. It’s done what it intended – it got a free advertisement in the Hull Daily Mail.”