The streets of London are paved  …  with estate agents.

Research which used only Rightmove data and therefore does not include any agents not on the portal, claims to have found that across London there are over 2,600 high street estate agents’ branches.

In seven London boroughs, there are more than 100 estate agents each with Westminster having 179 and Wandsworth over 150. At the bottom of the leader board is Barking & Dagenham with 25.

On average, each London borough has 83 high street agency offices.

The research was done by online agent HouseSimple, which calculated that last year, each London branch made just under four sales a month. The business used Land Registry data.

HouseSimple also calculated how many estate agents there are within 400 metres of major tube stations.

It research revealed that Walthamstow has 18 estate agents, while Wimbledon, Ealing Broadway and Borough each have 15 agents, and Canary Wharf and Notting Hill Gate each have 14 within that distance.

The research also claimed that London agents earned more than £1bn in fees last year. However, it used an average commission fee of 1.8% – and as Stephen Hayter’s article for Eye on fees shows, working out average commissions is a complex matter.

The online agent pushed its research to claim that high street agents may be costing customers by “filling their pockets”.

“While small independent retailers are being pushed out by rising rents, estate agents are securing the best spots on the high street and filling their pockets – last year to the tune of more than £1bn in fees.

“In a buoyant property market it’s easy for estate agents to set up shop, and by continuing to charge exorbitant fees to home sellers, they can afford to pay the rent on less than four sales a month.

“It’s impossible to walk down a local high street in London now without passing an estate agent’s window, but Londoners may still be surprised to know just how many estate agents there are across the capital.

“More than 2,600 estate agents is a staggering number when you consider that most people now start their property searches online, and many never even venture into a high street agent’s premises.

“So the question Londoners may legitimately ask is, do we need so many of them?” 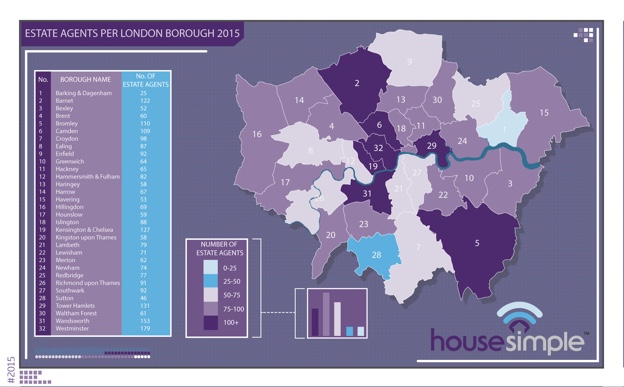