A complaint about Purplebricks has been informally resolved by the Advertising Standards Authority.

The complaint related to the “What’s included in our fixed fee?” section of the Purplebricks website.

A complainant objected that the website did not make clear that if customers use “A choice to pay nothing upfront” option they will have to pay an admin fee of £360 if they do not use the recommended conveyancing service.

Purplebricks agreed to put the qualification shown in the box by ‘i’ as per this screengrab. 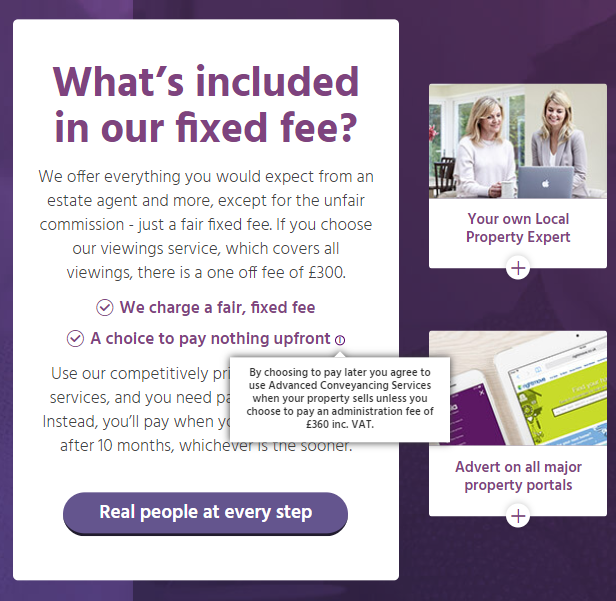 MK Property Services had run a draw for a bathroom make-over on Facebook but a complainant challenged that there was a geographical restriction on entry not given in the terms and conditions; that the closing date had been extended; and the prizes may not have been awarded in accordance with the change.

The ASA said it received written assurances that any future promotions would clearly set out terms and conditions; the closing date would not be changed unless unavoidable; and that it would clearly demonstrate that the winner was chosen at random.

Space 4 Living had advertised two flats to rent, using images of a ‘show flat’. A complainant said the pictures did not reflect the actual properties which were smaller.

The firm gave the ASA an assurance that future advertising would accurately reflect the property on offer.

A website, Property Collection Worldwide, was also reported to the ASA, with the complaint informally resolved.

Also informally resolved was a complaint about a TV advert by the Financial Conduct Authority which showed the disembodied head of Arnie Schwarzenegger.

The advert featured the head on caterpillar wheels, reminding people that the deadline to claim for mis-sold PPI expires next August.

However, it was aired during daytime and prompted complaints that it was frightening to children.

A spokesperson for the ASA said: “As the ad did not have any timing restrictions, it was included during some daytime programming. We approached the advertisers with these concerns.

“We received an assurance that they would no longer buy television advertising slots for this ad scheduled around children’s programming to minimise children’s exposure to the ad.”