A campaign is gaining momentum to get agents in the north-east to quit all other portals apart from OnTheMarket – and pull off at the same time.

Estate agent Mark Small, of Signature, which has four branches, launched the initiative.

Small is one of some 190 members of a regional group backing OnTheMarket.

He says that so far, almost all the agents along the coast within a ten-mile radius of Whitley Bay have agreed to pull off Rightmove, Zoopla and other portals. The same decision has been agreed by virtually all the agents in South Shields.

Small said that, on an analysis of yesterday’s listings, the agents in the Whitley Bay area who are quitting Rightmove and Zoopla have 92.5% of market instructions, while in South Shields, the agents have 87% of market share.

A meeting is due to be held on October 15 when he expects recruitment numbers to have increased, to agree the date when the agents will give notice.

The campaign leaflet to the 190 agents is headed: “Say NO to all other internet portals!”

It says that doing so will give agents control over their own data and protect them from online agents.

It outlines other reasons.

Small said that, because the north-east housing market has been poor in comparison with London and the south-east, it has not yet been a target for online agents.

However, he said that this situation could rapidly change, with very large amounts of money being pumped into online agency businesses.

“If we continue to instruct other portals, we are allowing our data to be used against us by internet only agents,” Small said. 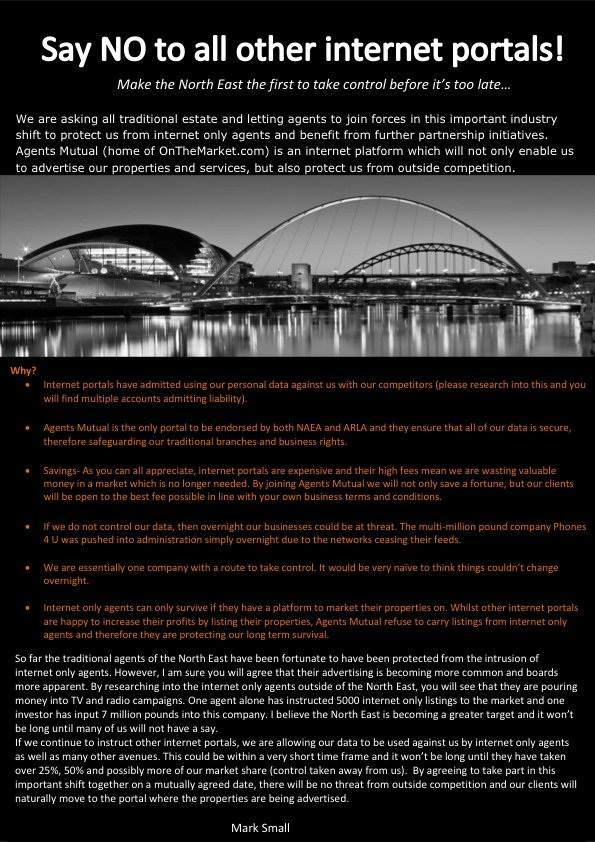