Prime minister Boris Johnson acted like a “dishonest estate agent” and lied to the Queen.

The accusation was delivered yesterday in written submissions to the Supreme Court by former prime minister Sir John Major claiming that Johnson had not told the truth.

Major likened Johnson’s behaviour to that of an agent in breach of his fiduciary care when he had not told a vendor that the buyer planned to ‘flip’ the property for a quick profit.

He said that the duties of the prime minister to the Queen could hardly be less than those of an agent to their client.

Major is supporting Remainer activist Gina Miller in her attempt to get the proroguing of Parliament ruled unlawful.

In written evidence, Major cited a court case where an estate agent was found to be in breach of his fiduciary care after he lied that the buyer of a new home would live there.

In fact the agent knew all along that the buyer not would not live there and that the property would be sold again for a profit as soon as the sale completed.

Major argued: “It could hardly be suggested that the duties of the prime minister to the monarch are less than those of an estate agent to a home owner.

“Accordingly, if the court is satisfied that the prime minister’s decision was materially influenced by something other than the stated justification, that decision must be unlawful.”

The Times and Mail are among papers with similar headlines – this morning the Mail ran its coverage under the headline: “PM is acting like a dodgy estate agent says Major”

Estate agents’ fiduciary care translates as a duty of care to the principal – generally speaking, the property owner.

There are two main rules under fiduciary duty – no conflict, and no profit.

The agent must not place itself in a position where its own interests conflict with that of the principal, or where there is a possibility that this may happen.

It must not profit at the expense of the principal.

Importantly, an agent might avoid breaching these duties if it has obtained the informed consent of the principal.

If there is a breach of fiduciary duty, it allows the wronged principal to bring a claim.

The home owner could, for example, ask the courts to rescind the contract, which could involve returning the property to the seller and refunding the purchaser’s money.

Below, how The Times previewed Sir John Major’s comments: 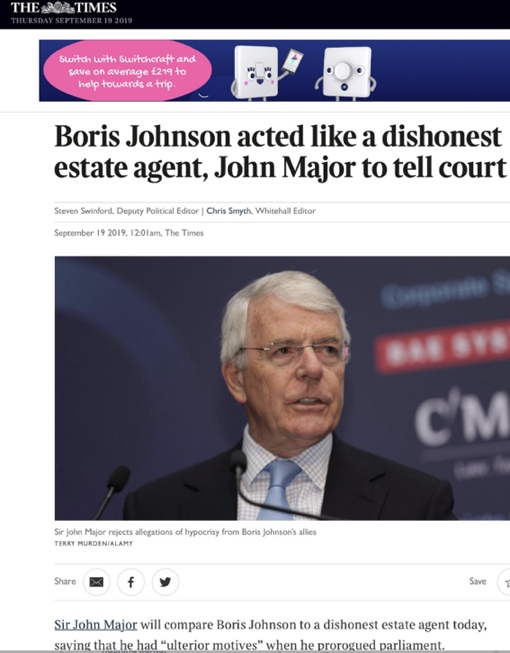