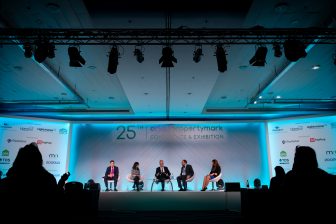 The 25th ARLA Conference, last big industry event of the year was well despite growing concerns about the threat of rising Omicron variant cases.

There were two live debates, with panels discussing the future of renting and workplace culture for agents.

Watched by an audience of 700, the first debate chaired by the returning conference moderator Julian Worricker, explored what the future holds for renting — specifically focusing on the Queen’s speech from May where the government proposed a lifetime tenancy deposit model, the Department of Levelling Up, Housing and Communities’ (DLUHC) now postponed white paper and upcoming reformations for the private rented sector (PRS).

The panel for the debate consisted of the NRLA’s Ben Beadle, journalist Melissa York, Propertymark’s Timothy Douglas, and Debbie Davies of the Tenancy Deposit Scheme.

The panel broadly agreed that there was a need to introduce regulation into the sector, with  Douglas highlighting the “nonsensical” approach of introducing reform without regulating the industry. Beadle took this further, highlighting the ways in which landlords will need to adapt to challenges that are soon to come their way and the need to ensure whichever framework replaced Section 21 notices acknowledges the concerns that are in the sector.

York highlighted the way in which the PRS has doubled in size since legislative changes introduced during the 1980s.

The panel also agreed that there is an affordability issue in relation to the lifetime tenancy deposit model. As pointed out by Melissa, bigger cities (in particular London) require higher deposits and it can be very difficult for tenants to come up with two deposits.

Beadle questioned where the risk with lifetime deposits would sit as landlords should not be in the position of not knowing whether or not they have a deposit. Douglas agreed with the NRLA CEO, stating that the lifetime tenancy deposit is not the full answer, as it will not work in every scenario.

Overall, the panel agreed that over-regulation is a cause of landlords moving out of the PRS and into other sectors, such as short-term lets. There are, as Douglas highlighted, at least six governmental departments interacting with the sector.

The panel also agreed that there was a need to look at inefficiencies within the court system, with Davies highlighting the importance of mediation before approaching the courts and everybody believing that there is room to add a regulator somewhere within the process, much like the Housing Tribunal in Wales.

The second debate of the day was centred around how employers can boost retention and recruitment efforts, with perspectives by:

Since the pandemic, there has been an increase in what prospective employees expect. More people than ever before now expect to be able to work in a hybrid fashion, with greater emphasis on the ability to maintain a good work-life balance.

Investing in staff, creating clear pathways of progression and encouraging a positive environment within the workplace were all aspects that benefitted retention and recruitment according to the panel. Hÿtch was the first to highlight the importance of understanding that people come into businesses at different levels and have different levels of ambition.

Understanding people’s professional and personal lives, being flexible around benefits offered to employees and lots of engagement activities such as awards programmes and staff happiness surveys were highlighted as top tips for fostering a positive workplace culture by both Khan and Hÿtch.

And, while Deverell-Smith highlighted the benefits of a hybrid-working approach, plus the rising number of employees actively searching for flexibility, Maxine and David pointed out that for smaller businesses this may not be as easily achieved logistically.

Kindness was the keyword, as Mary Portas — retail expert, author, TV star and the second keynote speaker of the day — spoke about the importance of building a new type of business attitude in a society that has just experienced trauma.

Connection, collaboration, community and sometimes being vulnerable were the four main aspects of the human experience according to Mary, with the emphasis that growth did not need to come at the cost of kindness.