“I’d like you to put my house on the market, but before you come and value my property I would like to know what you will charge.”

I guess this is a question that agents are asked most days, and I am not the one to tell you how best to respond to it, so I shall leave that to the likes of Julian O’Dell, Mike Day and others.

What I can tell you is just how much agents are charging – on a ‘no move, no fee’ basis. You can then decide whether your fees are good, pretty much average or less than good.

I am sure we settle more agents’ invoices at myhomemove than any other UK conveyancer, so the following observations are not based upon a random, or even a small sample, but reflect a substantial share of the market.

Bearing in mind that each year we undertake conveyancing in every single postcode area within England and Wales, our data covers the breadth of the UK property market.

We have been keeping these records since 2011, so it is interesting to make comparisons between then and now.

Please remember that all of the results below exclude the fees charged by online or hybrid agents, as of course we do not have to settle their invoice as the money is paid up-front. All figures also exclude VAT.

Do you remember what it was like in 2011? Amongst many other things transactions were still at a very low ebb, we had a Royal Wedding (and a second child is anticipated any day now), there were the Tottenham riots, and of course the sad loss of people like Steve Jobs and Amy Whitehouse. The only thing that remains the same is the Bank Base Rate!

So first things first: 16% of invoices were for over 2% back in 2011, but this has now reduced by nearly half. I cannot tell you whether these were for multiple agencies or you were simply more able to sell a much higher sole agency fee. (By the way, if you are receiving over 2% you should pat yourselves on the back as you belong to a small select group.)

At the other end of the scale, similar things have happened. In 2011, 2.1% of all fees were for less than 0.5%, but even more clients are now being charged this, having increased by 66%, with more than 3.5% of transactions attracting what seems to be a very low fee indeed.

In 2011, the most common fee scale was between 1.4 and 1.6% – and I guess there is no surprise there, as nearly a quarter of all invoices were in this range.

In 2014 this also remained the most common range, so it seems we have identified a sweet spot. But in the interim there has been a distinct shift.

So having identified the +/- 1.5% sweet spot, you may also notice that there is a range that seems to be rarely used – around the 1% mark. It might appear that if you set out to achieve 1.2-1.6%, and challenges arise from a prospective seller to reduce it, your knee jerk reaction might be to take it straight down to less than 1%.

From our 2015 data, it seems that agents are doing just that, or at least they are starting to identify a new sweet spot in the 0.75-1% region.

As we begin to reach a tipping point in the market, this new trend may suggest consumer demands are changing, as is the way that agents react to them.

Prices may go up, and fees seem to inevitably come down, but the average income per case remains much the same. Funny that. 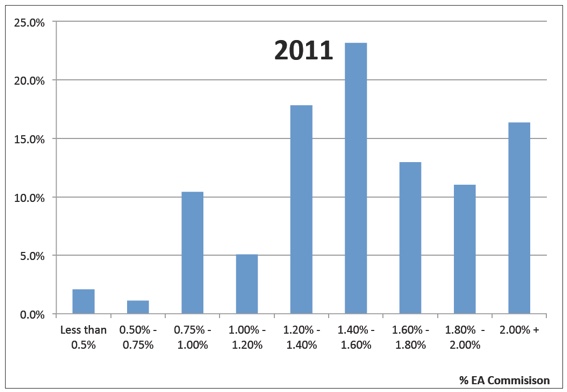 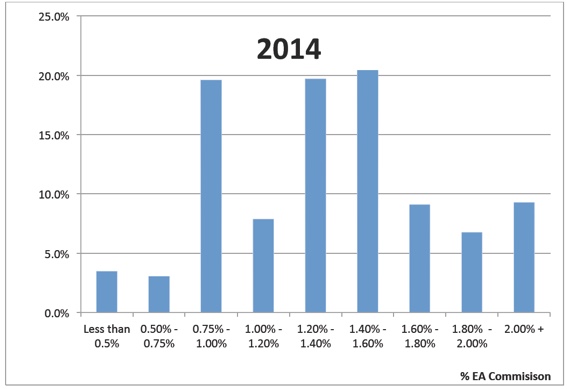 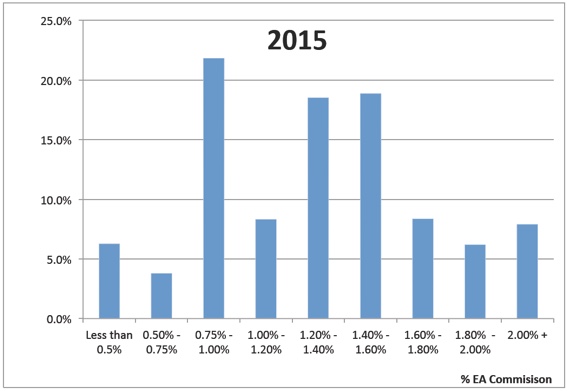