An estate agent had a miraculous escape yesterday – saved only by the call of nature.

Negotiator Chris Peirce, who normally works at a desk in the window of Kings estate agents in Sevenoaks, Kent, popped to the loo seconds before a 4×4 vehicle crashed its whole length into the office.

“I’m not a big believer in God but I feel like someone is watching over me because the fact that I have gone to the toilet at that exact moment has saved me.

“It’s so lucky, I can’t believe it happened really.”

Kent police and an ambulance rushed to the scene and removed a passenger from the vehicle.

The estate agency is now boarded up, but Peirce said he hopes it will be business as usual today.

A 17-year-old hairdresser, Albert Facey, who works opposite the agency and saw the whole thing, told the local paper: “The car tried to reverse and did a loop then just went smash into the window.”

“My mate Chris sits on a desk just behind the window but he had just gone to the toilet.

“If he’d still been sitting there he would have been brown bread.” 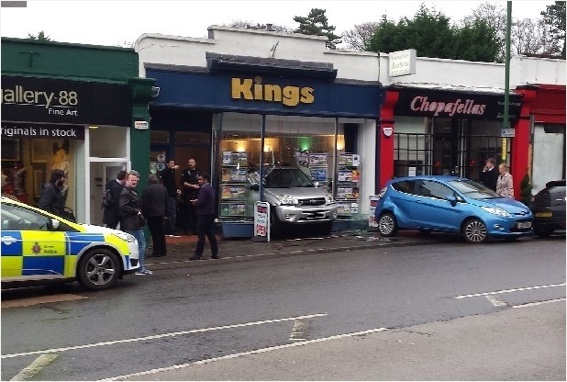