Figures from the Office for National Statistics’ latest Index of Private Housing Rental Prices showed rents paid by tenants in Great Britain rose by 2.3% in the 12 months to September 2016, unchanged from August.

London rental inflation rose to 2.7% following seven successive periods of either falling or stable inflation, while the South-West continued increasing and recorded a rate of 2.2% in September.

Rental price inflation was strongest in the South-East at 3.5% and the East of England at 3%, and was weakest in Scotland where it fell 0.1% and in Wales where it grew just 0.1%.

Paul Smith, chief executive of haart estate agents, said this was a sign of buy-to-let investors returning to the market.

He said: “Unsurprisingly, we have are seeing the highest rates of rental growth in the South-East and the East of England, overtaking London as the pacemaker for growth in the UK.

“The problem of spiralling London house prices continues to mean that investors get increasingly poor yields on buy-to-let properties in the capital, a problem made worse by the stamp duty surcharge, and landlords are unable to increase rents much further.

“We will increasingly see investors moving to the Midlands and the North where prices are lower and yields are more attractive.

“However, we’re also seeing interest from overseas buyers bounce back as the pound remains weak, and as such London will remain a well sought after destination for investment. Longer term it is not yet clear if this trend will continue.”

Nick Davies, head of residential development at Stirling Ackroyd, suggested the start of graduate schemes and students going to university was pushing up rents.

He said: “That’s increasing competition for rental properties, driving up prices across the market.

“This year the competition is particularly fierce, thanks to George Osborne’s anti-landlord policies restricting the supply of rental properties.

“If students are refusing to pay rent, this may lead to even less investment in the sector.”

Meanwhile, the ONS tried to address the age-old question of why its data is so different to other private sector figures in separate research.

This graph shows just how stark the differences can be between ONS numbers and those of organisations such as Homelet. 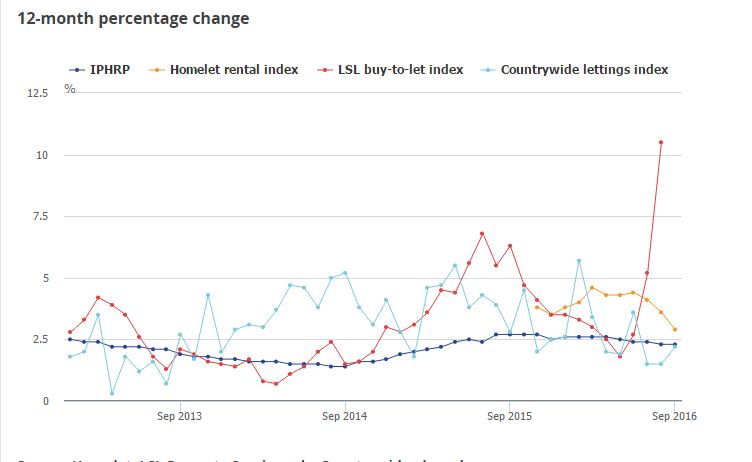 The ONS attributes these differences to private sector indices mainly covering newly-let properties, which can be more volatile, as well as differing methodologies and regions covered.

The research shows the ONS does actually come quite close to Countrywide’s own data on occupied lets. 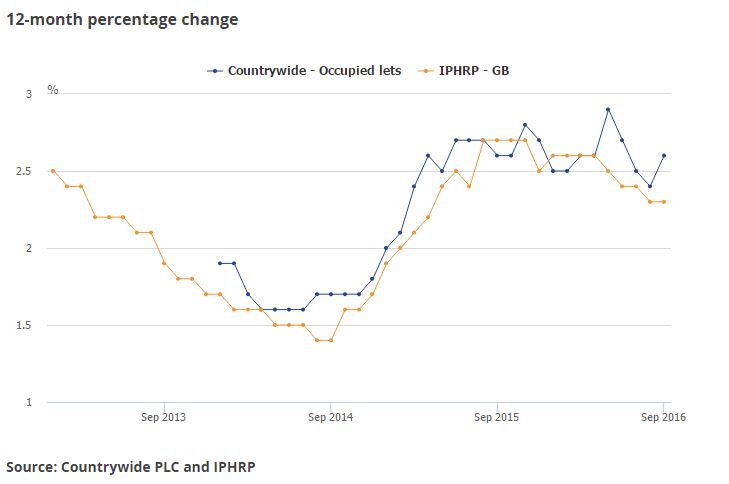