Lettings market activity throughout June was significantly higher than recorded at the same time last year, the latest Rental Index from Goodlord has shown.

As a result, rental costs are rising in the majority of regions and void periods are coming down, as tenants compete for new properties and the industry continues to see unprecedented demand after months of inactivity.

Overall, the average cost of rent has risen by an average of 3% across the eight regions monitored by Goodlord.

The only region which saw a dip in prices was the East Midlands, which saw average rental costs decrease by 4% – from £825 to £795.

Void periods dropped in five out of eight regions monitored, as the market caught up to demand following the lifting of lockdown rules.

The biggest drop came in the North East, with voids reducing from 29 to 17 days on average.

A similarly large decrease came in the South West, where void periods dropped from 23 to 12 days.

This reflects the increase in rental prices across the South West region.

Drops in void periods were also recorded in the South West and the North West.

It was a different picture elsewhere, however, with increases in void periods in the East Midlands, Greater London and the West Midlands.

After a huge number of new tenancy applications were received during May, June saw that demand translate into completed lets.

The number of completed lets stayed above 2019 averages for all but six days of June, marking an extremely busy month for the industry.

The busiest day of the month was Wednesday 10th June, when the number of completed lets was 24% higher than the same day in 2019.

Each day in June saw new tenancy applications remain above 90% of 2019 levels. 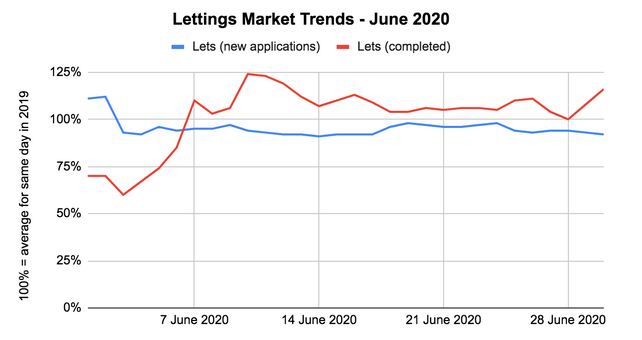 “If May was characterised by a release of pent up market demand, then June was that demand translating into action.

“The numbers throughout the month were incredibly impressive and show how hard the industry has been working to serve as many tenants and landlords as possible.

“We saw an unprecedented number of lets completed each day in June.

“It’s therefore no surprise to see those levels of demand starting to affect average rental costs and void periods.”