The new owner of easyProperty says he has no regrets about his purchase.

He is set to launch a comprehensive set of new features, while more than doubling the number of licensees and territories.

David Brierley, who bought easyProperty in August for an undisclosed sum, will unveil a new website, new CRM software, an interface that will connect all parties to a transaction, and new pricing later this month.

Brierley has also spoken of his ambitions to grow the brand which has so far passed through two owners.

The first was Robert Ellice, who famously held a ‘funeral march’ through London to mark the death of the high street agent; and eProp Services, parent company of The Guild and Fine & Country, which had the painful task of reporting losses of £9m and liabilities of £22.8m over a 15-month period for its online venture and not surprisingly got out.

He revealed that there are currently some 23 licensees covering 40 territories. Most of the existing licensees are Guild or Fine & Country agents, but Brierley says he took on the business knowing that many agents would stop trading the easyProperty brand.

He said: “It was inevitable that we would lose quite a lot. Most had already given in notice, and we have lost another eight or nine since.

“The previous business model just wasn’t working because of the conflict of interest between easyProperty and the existing high street business.

“Those licensees who have remained see easyProperty for what it is, and perceive value in the brand.”

However, Brierley says he is in active talks with prospective licensees for 54 additional territories – in Wales, the midlands and the north. “We will also be launching in Scotland in January,” he revealed.

None of the licensees in the pipeline are connected to the Guild or Fine & Country, but are drawn from the wider industry.

One oddity has been that licensees are free to set their own pricing, which is why there is no mention of cost on the current website.

This will change at around Christmas when Brierley launches three packages – upfront, split between upfront and sale, and no sale, no fee.

He won’t be drawn on what the new pricing will be, but says it will be in the same ballpark as Purplebricks and Yopa, although slightly cheaper.

“Stelios cannot understand why ‘easy’ isn’t doing for property what it did for travel,” said Brierley.

He believes that this will soon change – not least because he thinks the brand offers such opportunities for agents wanting to set up on their own.

“What we’re offering is an iconic brand and a business in a box,” said Brierley.

“The easy brand will give licensees huge leverage, probably the most recognised in the country after Virgin.

“Thirty years ago, someone wanting to set up on their own would have found premises on the high street, put their name over the door, and started trading. Now the costs are prohibitive for most people.

“We’re offering a business model that will appeal to branch managers and senior negotiators who want to work for themselves, and which they will find much more accessible.”

The cost is £350 per territory per month, with most potential licensees wanting two territories. Each territory has around 25,000 owner-occupiers in it.

There is no joining fee, and licensees get to keep 70% of their listings money – payable once it has been received.

Brierley accepts that to be successful easyProperty will mean hard work – both for the franchisees and his own Hampshire-based team. He firmly believes it will pay off, but accepts that there was some incredulity when news broke of his acquisitision.

“We’re offering both consumers and the industry more choice, and that can’t be bad,” he said. “I have no regrets about the purchase – far from it.”

Below, David Brierley, CEO of easyProperty, with Sir Stelios 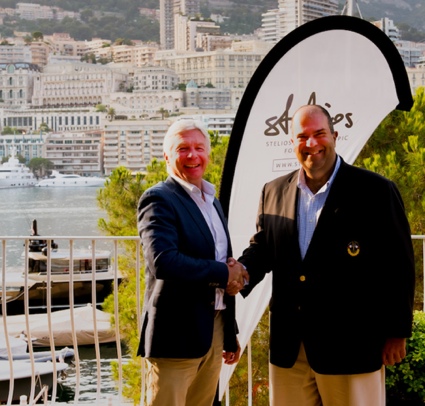