An American firm offering robotic viewings is planning to expand into the UK.

The idea has  been sharply criticised by Ed Mead, who runs outsourced viewing service Viewber. He suggested the idea was ludicrous and also queried safety aspects.

Zenplace Property Management, based in San Francisco, California, already claims to be operating hundreds of tablet-carrying robots – which strictly speaking are actually moveable video monitors – across several parts of California, having launched the technology last year.

Said to be backed by some of the same investors that supported the likes of Google, Facebook and Paypal, Zenplace says its automatons are operated by human letting agents.

The technology works by allowing prospective tenants who see a vacant property they like the look of to text Zenplace.

They are then prompted to send a photo of an item of ID through their smartphone for a background check.

If it passes, the prospective tenant is sent a unique code that allows them to enter the property via a “smartlock”.

When they enter the property, the robot agent is activated. Connected to a real, live letting agent, it welcomes them in, verifies that they are the same person as the one on the ID and then takes them on a tour of the property. 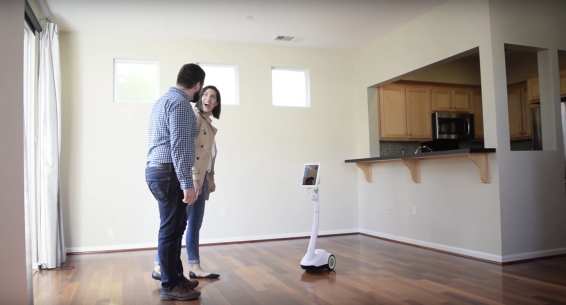 The technology can also be called upon to bring up images of local features such as parks, and can offer real-time data on rental rates in the area.

If the tenant likes the property, it will help them fill out an application on the spot.

Zenplace, which has developed the technology in-house, is an agent but is also open to partnerships with agents or landlords with large property portfolios.

CEO Rahul Mewawalla told EYE that he hoped to introduce Zenplace to the UK soon.

He said: “We have recently received an enormous amount of interest from the UK both from landlords and institutional property owners who see this as a great way to improve efficacy of their own leasing processes and so we are excited about the opportunities in overseas markets and particularly the UK.”

Asked how agents might react to the idea of robots conducting viewings, he said: “What has been interesting is that [American] agents have found it very empowering.

“If you are working as an agent the traditional way, given how traffic and parking is these days you can do three or four showings a day but with these robots you can do 15 or 18 showings a day easily, so it dramatically increases agents’ productivity.”

He declined to reveal how much Zenplace had invested in the technology, nor exactly who its investors are, although he said it was “a significant amount from tier-one Silicon Valley investors”.

He was also reticent about the costs to an agent of using robots.

There is one other slight drawback to the robot agents at the moment – they can handle a few steps but can’t make their way up staircases, although Zenplace says it is already working on a new version of the robot that can climb a full flight of stairs.

Ed Mead, co-founder of outsourced property viewing service Viewber, said: “This is the worst of both worlds. There is absolutely no way that anyone is ever going to allow a renter to go to a lock box, take a key out, let themselves in, and merely have an iPad pointing at them. Most people can do the iPad bit at home and look around and then they want to physically go and look at it.

“Why would you want to go to the property to talk to someone on an iPad?

“At Viewber we have had enough issues convincing people of the safety of lock boxes, which are used by 30m people in the States to get in and out of places. It is very commonplace there, but the idea that you would give someone who is just going to have a look around access to the lock box is simply beyond the pale.

“I can’t believe that anyone would think that is in any way sensible.”

But Mewawalla said: “What we find exciting about this is that it is in line with where the macro trends are – the new age of tenants want to do things at their convenience, want to move things quicker and are much more on their mobile phones than ever before.

“Landlords love it because it allows them to reduce their vacancy rates and take things off the market really quickly.”

You can see how the robot works on this short video: