The Stamp Duty exemptions are starting to have an impact on first-time buyers, agents claim, as sales to them reached a three-year high last month.

Data from the NAEA Propertymark February Housing Report found that the proportion of sales per branch to first-time buyers (FTB) rose to 29% from 27% in January.

Year on year, FTB sales were the best since February 2015 when they accounted for 30%.

The average number of sales agreed per branch to FTBs also rose from seven in January to eight last month – the highest amount since October 2017.

However, in the rest of the market, the number of prospective house-hunters fell by from 367 registered per branch in January to 309 in February. This is down 28% year-on-year.

In line with demand, the number of properties available for sale per branch dropped from 36 in January to 35 in February.

Of those that did sell in February, 74% went for less than the asking price, while 22% were sold at the listed amount.

Mark Hayward, chief executive of NAEA Propertymark, said: “Since the Chancellor cut Stamp Duty for first-time buyers, there have been a good level of sales to the group, but they haven’t rocketed.

“Our members have noticed FTBs holding off on making purchases since the rule was introduced – typically outside of London – opting instead to save for longer to maximise the full Stamp Duty relief.

“This may be one reason why sales are up but not as high as we might expect. The other reason is that the cost of buying is still very high, and FTBs are still finding it difficult to save for their deposit.

“As the cost of living continues to rise – with consumer price inflation standing at 2.5% in February – we still have a long way to go to make the dream of owning a home accessible to all, but this is definitely a step in the right direction.”

Meanwhile, agents in Wales are preparing for the introduction of the Land Transaction Tax (LTT).

From April, LTT will replace UK Stamp Duty in Wales, a system which NAEA Propertymark says is fairer.

Hayward said: “We’re pleased that the Welsh Government has listened to our proposals and next week will be introducing LTT bands in Wales. House buyers will really feel the difference of these changes.

“For buyers at the lower end of the market, the new bandings mean they won’t pay any land transaction on properties worth up to £180,000 – the value of the average house price in Wales.”

The new rates are below and apply to the portion of a price the buyer pays in each band. 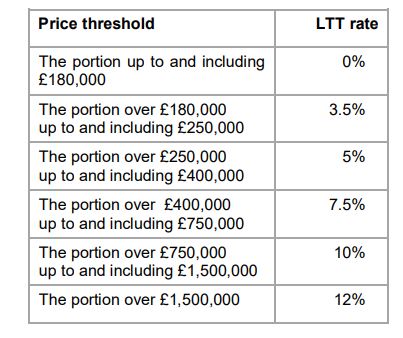